Diving Into the Unknown: 10 Secret Islands Italy Has To Offer

Diving Into the Unknown: 10 Secret Islands Italy Has To Offer


For most of us, Italy stops at the main tourist areas such as Rome and Venice. However, delve deeper into this country and there truly are some golden finds. Many of us don’t realize it, but Italy is home to some of the most tranquil islands in the world that are completely picturesque. 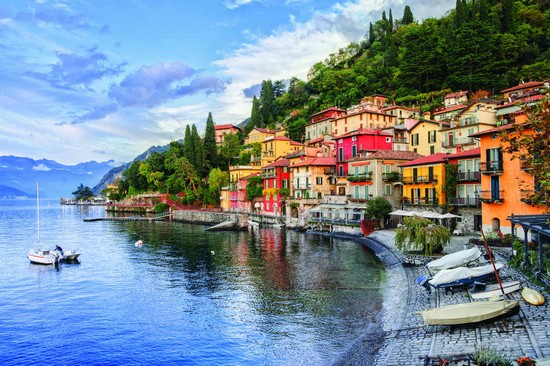 To make matters even more enticing, many of these islands just don’t find their way into the travel brochures. In other words, the travel agents tend to ignore them, and this means that they haven’t become awash with tourists. Of course, some have been discovered, but on the whole the following ten islands we have found are unfound gems that just have to be visited before the tourism boards leap into action.

San Domino might be the largest of the Tremiti Islands, but that doesn’t at all mean that it is inundated with tourists. On the contrary, few people have even heard of this island and its isolated location actually works to its advantage.

For anyone who wants to discover a “different” coastline, this might be the island for you. It’s certainly not got the clean-cut white sands, but it has coves and rocky beaches which add a certain charm to San Domino. Additionally, any divers out there will be in their element, as the island has plenty of marine life and if you dive far enough – there’s a Roman shipwreck waiting to be discovered.

There is a small amount of tourist accommodation available for the island, while you can access it via the Tirrenia Ferries service which operates all-year round. 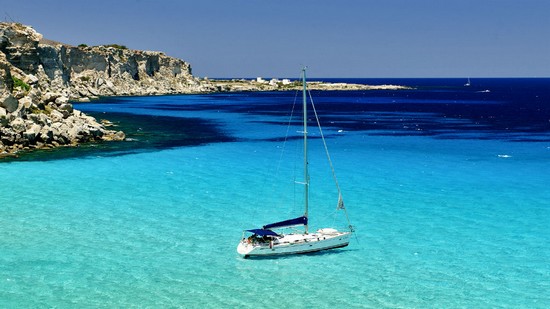 There’s no doubt that Panarea is much more popular, although it’s small population of 200 means that it just doesn’t have the capacity to welcome large numbers of tourists. With that being said, there are some hotels available which are open to tourists – but the trick is booking early to get in before the masses.

The views that Panarea offers are purely stunning and offer a superb look over Stromboli. This isn’t an island which is bustling by any means either; cars are not allowed and the only vehicles that will transport you are electric golf buggies. The fact there is also no electric street lighting (this has been replaced by Moroccan lanterns) just adds to the whole effect.

Again, it’s one of those islands which is easily accessible, with Siremar and Ustica lines have daily services from both Milazzo and Messina. If you’re based in either Cefalú, Naples or Palermo, there are ferry connections as well. 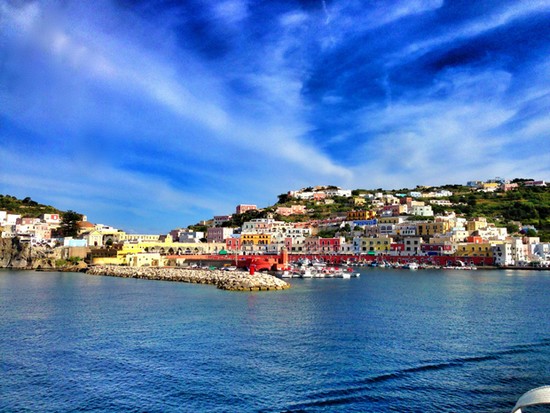 Ponza is a little different to the previous two suggestions, for the simple reason that it attracts a lot more visitors. Nevertheless, the authorities have made sure that it is still unspoiled.

For the above reasons there is a lot more accommodation on offer in Ponza, although for those of you looking for a private getaway this might be difficult due to the small size of the island and the larger number of tourists.

If we were to pick the pinnacle of Ponza it would come in the form of the Chiaia di Luna beach. This isn’t any old beach – it’s only accessible through a Roman tunnel.

Again, Naples forms one of the easiest transport links for Ponza. There is a SNAV hydrofoil available here, with the connection made at Ventotene. 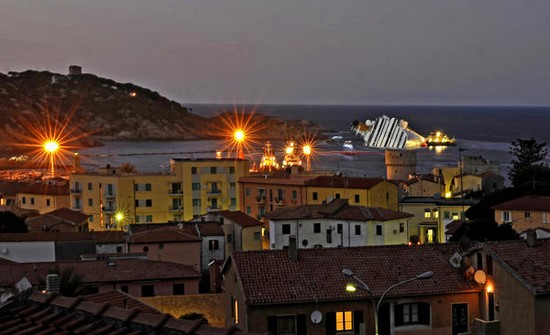 Giglio is probably one of the more interesting islands on our list, as most people will visit it due to its location. This is because it provides perfect access to many of the nearby Tuscan islands – allowing tourists to use it as something of a base.

The island itself can be described as a granite rock, with little land around it. There are several hotels, but it very much has the ‘wild’ appearance which is hardly surprising when a lot of the nearby areas are a marine reserve.

Most people will visit Giglio via Porto Santo Stefano, with regular ferries running to accommodate this.

In terms of simple, Favignana fits the bill perfectly. This is one of the least-commercial islands you’ll ever have the pleasure of seeing and it is largely made up of locals.

The island has several beaches, and a pristine coastline, but most people will tend to take trips to several of the other Egadi islands.

Naples and Trapini both run daily ferry services to this island, operated by Ustica Lines and Siremar. 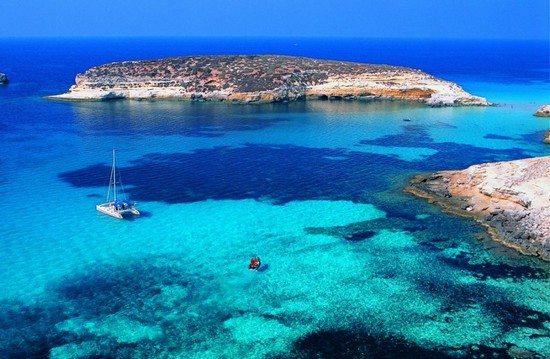 This is one of the Italian islands which regularly finds its way into the news, with the destination unfortunately having an illegal immigrant problem. This is mainly because of the short distance (approximately 113km) which separates it from Tunisia. In fact, if we look at the island’s location technically, it’s actually based in Africa as opposed to Europe.

Most people will visit Lampedusa for its beaches, which have been described as some of the most beautiful in the whole of the country. There are also festivals held on the island, with the most renowned being the Madonna di Lampedusa which boasts everything from fireworks, to concerts to games. This takes place on September 22nd.

To get to Lampedusa, take one of the Siremar ferries which run from Porto Empedocle. 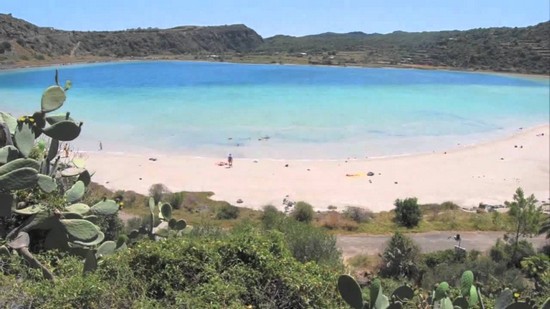 We talked about ‘secret islands’ in the opening to this guide, but with Sting and Madonna being two of the past visitors to Pantelleria one could argue that it might not fall into this category anymore.

Nevertheless, their presence just highlights how much beauty the island houses. Mud baths, sauna caves and beautiful rocks are the basis of it, while many houses are formed from lava stone.

This is also a destination which is renowned for its food. The local wine has to be sampled if you visit, as does the stuffed aubergines and fish couscous which are always lauded.

Pantelleria is one of the few islands on our list which has its own airport. You can reach it via Palermo, Rome, Milan and Trapani, or just hop on a ferry from Trapani. 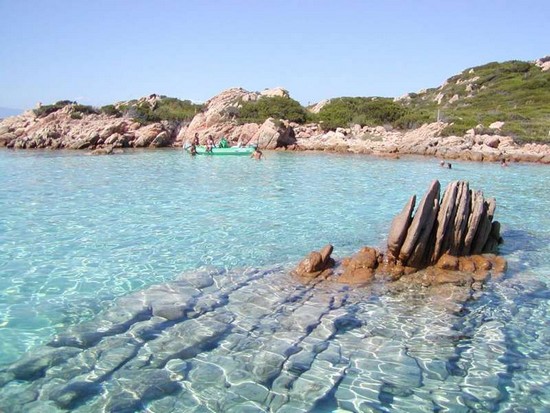 Compared to some of the islands we have looked at, La Maddalena is definitely one of the more densely populated ones out there. After all, there are thought to be around 11,000 inhabitants of this island – which is hardly surprising when you consider its beautiful surroundings.

La Maddalena has waters which have that old cliché of ‘crystal clear’ attached to them, while the white beaches compliment them fantastically.

This is one island which attracts a lot of Americans, many of whom actually live there. This is because the US Navy have their own submarine tender situated on the nearby island of Santo Stefano. On that note, if you can get out to nearby islands such as the above and Razzoli, Budelli and Santa Maria, it really can complete your trip.

For an island of such popularity, it won’t be a surprise to hear that ferries run 24 hours a day. You can reach La Maddalena via Palau. 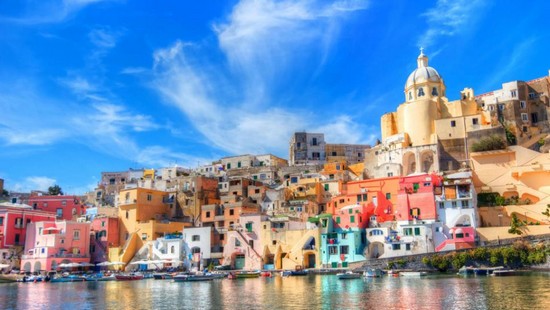 We’ve just touched on celebrities, so now it’s time to give a mention to specific movie titles. Procida is an island which has had multiple movies filmed on it, including “The Talented Mr. Ripley” and “Il Postino”.

When one analyses the scenery of Procida, it’s really no surprise it has attracted Hollywood in the past. Based in the Gulf of Naples, the houses are painted in pastel shades, but set beside beaches which are again enriched by clear white sands.

There are several bars and restaurants dotted along the fishing harbor, while it even has its own old town.

It’s possible to get either the hydrofoil from Molo Beveerello, or the Caremar ferries from Calata Porta di Massa in order to reach Procida. 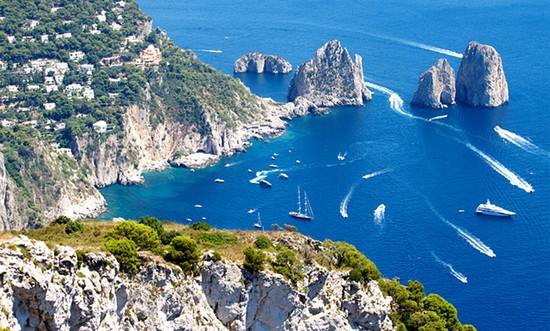 We’ll finish our roundup with an island which seemingly oozes luxury. It has some of the most beautiful sea caves in the world, including Grotta Azurra which just has to be visited if you get the chance to see Capri.

The island as a whole is populated by narrow streets, with plenty of restaurants on offer to tourists. As well as the small town, the beach and waters are just like most of the islands on our list and are stunning to both see and walk on.

Capri is easily accessible, with most people opting for a ferry from Naples or Sorrento. Some people even hire a private boat – it’s a destination which tends to attract the wealthy.